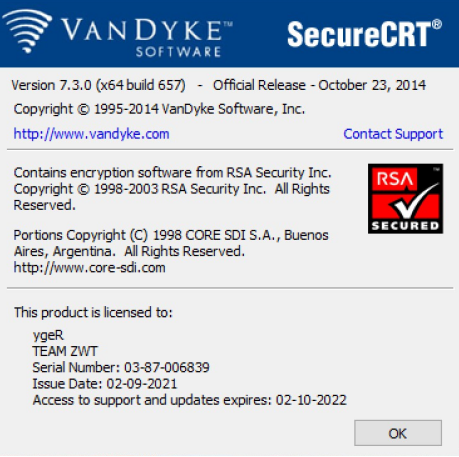 To do a good job must first sharpen his device. So today we’re going to take a full look at what are the tools used by network engineers in the computer software. And which one is your favourite?

SecureCRT, a terminal emulation software, is developed by VANDYKE to support links, such as serial, Telnet, SSH etc.. It is widely popular among engineers for the features of simultaneously sending commands to the multiple terminal Windows , using VBS and js script to enhance operational efficiency.

Putty as a free old terminal software, although the interface is simple but having necessary basic functions, often is simplified to attach in a variety of applications, such as gns3 simulation simulator. It is a good choice for your urgent need of a terminal software debugging equipment due to small space, free and directly running without installation etc.

People who often contact the server should be very familiar with Xshell, which has an abundant color scheme to make people set according to his favor. Such a colorful scheme is a feast for the eyes. With Xftp in the common company, not only those who often contact with server, but also network engineers sometimes use it to do works for instance importing mirror network equipment.

Finalshell, a new emerging in recent years, is domestic conscience terminal software, supporting SSH, Telnet, remote desktop connection mode. Its left side of the server resources information can make real-time operations staff intuitive see server running state, and the file directory in its bottom clearly show the directory structure, which is good for us not need to click commands frequently and can also directly graphically upload or download files. Such a conscientious app no one can hate.

PStools is Microsoft’s official development toolkit, only 4.2 MB in the size but has complete functions, especially the psping often used by engineers. Psping that is convenient to make strategies not only can do traditional icmp tests, but also can be used to test TCP.

Wiresheark, a powerful and free package analyzer, almost support all protocols,  using regular expressions in package to filter and analysis, which is considered as the good helper in work and learning. No matter how confusing the phenomenon of the multimodeis, we can solve them through catching packages.

The first one is the free virtualization software produced by oracle. With the characteristics of lightweight and free volume, it is beloved by the mass. If you just want to virtualization several different system environments, but don’t want to do too difficultly, the cabinet and convenient installation-easy virtualbox must be your first choice.

As a commercial software, VMware Workstation pro has more rich functions and features, and more comfortable user interface. VMware Workstation support the docker and kubernetes cluster, and additionally support simulation for the loss packages, delay and bandwidth of virtual network.

Microsoft’s own virtualization software, the characteristic of whom is to perfect the support of the Windows system. The segmentation of virtualized operation mode is not based on a single operating system to simulate the CPU instructions, but to directly call IntelVT instruction to truly realizing “hardware virtualization” technology, having a good advantage in speed and security.

Almost everyone learned CISCO’s all know that PT simulator, whose advantages are to take up the small space, and can see packet forwarding method  through their own simulation model. It is very friendly for beginners  but also defects in limited functions. Nevertheless, when you think it limits your footsteps, which proves that you have begun to strengthen, so it’s time for you to use a more powerful simulator.

GNS3 currently supported ways such as dynamips, iou and qemu to support   equipments from manufacturers. GNS3 is free,which can be used to simulate, configurate, test, and eliminate real network`s or virtual network`s faults. GNS3 can run on the local computer network topology of a small amount of equipment, and can also cooperate with many devices GNS3 server running on the cloud

Developed by huawei, network simulation platform not only support the simulation of the huawei routers, switches, firewalls, and wireless devices, and can help quickly learn huawei command configuration, but also support the interface caught, and communicate hrough the real network cards and network equipments.

HCL, the graphical interface of network simulator launched by H3C, is suitable for those who are preparing to take H3CNE/H3CSE/H3CTE/H3CIE or used in virtual environment test and the configuration scheme verification, because the users can through the friendly graphical interface structures on the computer virtualization network environment with routers, switches, firewalls and other network equipments.

As a old-brand remote control software, it support file transfer function such as shortcuts to send. For those who often serve the customers, it don’t have to arrived at the scene and can also set the home or the company’s computers to unattended mode, and remotely access at any time. It is free for private users, but limits the number of connected devices.

This is a new rising domestic software in recent years, which is stable and has many functions, such as cross-platform connections, file transfer, remote printing and boot, privacy screen, remote camera, text chat, network real-time diagnosis, mobile phone screen. What`s more, the free version can connect 100 devices at the same time without speed limit and its functions can meets all in office scenario.

Above is summarized that the collection of commonly used software by network engineers. Come to share with us your favorite software.