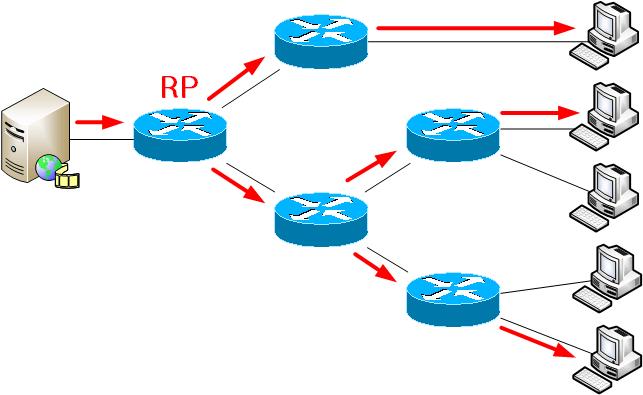 Multicast technology refers to a type of network communication in which a single sender corresponds to multiple recipients. In the multicast technology, by transmitting a single information flow manner to multiple receivers, network communication traffic with multiple receivers simultaneously listening to or viewing the same resource can be reduced.For n-party video conferencing, you can reduce the bandwidth length by a(n-1) times. Typical of “multicast” is IP multicast using multicast addresses. IPv6 supports three types: Unicast, Multicast, and Anycast. IPv6 does not have a specific classification of broadcasts, but is a typical type of multicast.In addition, the multicast definition includes some other protocols, such as the Asynchronous Transfer Protocol (ATM) using “point-to-multipoint” or “multipoint-to-multipoint” connections.Multicast technology is based on the concept of “group” and belongs to the receiver’s proprietary group, which mainly receives the same data stream. This group of recipients can be assigned anywhere on the Internet.

When there are 10,000 users watching TV through the network, if one traffic is transmitted for each user separately, not only the server can’t stand it, but the network can’t bear it.Multicast (also known as multicast) transfers a piece of data like a TV, and computers that need to receive data join the group. Although the multicast configuration is not complicated, the theoretical knowledge is quite complicated.Multicast uses the address 224.0.0.0–239.255.255. Different addresses are different groups. A group may have multiple sources, and the device that needs to receive data is a member of this group.

There are two ways for traditional IP communication: the first one is between a source IP host and a destination IP host, that is, unicast;The second is between a source IP host and all other IP hosts in the network, that is, broadcast.If you want to send information to multiple hosts on the network instead of all hosts, either broadcast or the source host sends unicast IP packets to multiple target hosts on the network.When implemented in broadcast mode, not only will the information be sent to the unneeded host, the bandwidth is wasted, and the broadcast loopback may cause a serious broadcast storm;When implemented in unicast mode, the repeated transmission of IP packets will waste a lot of bandwidth and increase the load on the server.Therefore, the traditional unicast and broadcast communication methods cannot effectively solve the problem of single-point transmission multi-point reception.

The manner in which a router forwards a multicast stream is quite different from that of forwarding a unicast stream. The multicast source that sends the data does not know where the receiver is.It is important to ensure that the recipient can receive the data and that the data does not exist on the unnecessary network. The router must determine a forwarding path for multicast.The router uses reverse path forwarding (RPF), which performs source address test on each received multicast. If the data is received from the interface that reaches the source, it is forwarded to the downstream router.

PIM (Protocol Independent Multicast) is a multicast routing protocol. Protocol-independent means that the multicast protocol does not care whether unicast routes are learned through RIP or OSPF or other means.PIM has two modes: PIM Dense and PIM Sparse, which are usually used in conjunction with Dense to become PIM Sparse-Dense.

Dense is typically used in networks where group members are dense. In Dense mode, when a multicast source appears, the router assumes that all networks have group members and constructs a forwarding tree from the source. All networks have multicast traffic.However, each router will immediately query whether there are members of this group on its own interface. If there are no members, it will stop forwarding multicast streams to this interface. If there is no member on the router, it will send a message to the upstream router and pruning it off the forwarding tree.The message is sent one level at a time, and finally the multicast routing protocol will construct a forwarding tree with the source as the root and no redundant multicast traffic.If a new member joins, the router will send a message to the first level to establish a forwarding path. In Dense mode, different trees are created for different sources, so the number of trees may be many.

Sparse is usually used in networks where group members are sparse. In Sparse mode, the router assumes that all networks do not have group members unless a host explicitly indicates that it is joining the group.

The establishment of the forwarding tree starts from the leaf node group member of the terminal and extends backward to the root node of the center.Unlike the Dense mode, Sparse is based on a shared tree. That is to say, the traffic of a group is sent to the central node (called RP) and then forwarded from the RP to each group member.When a group member joins the group, the local router sends a member report to the RP, and the router along the way adds the branch to the shared tree. Pruning is performed when a group member exits from the group.The advantage is that the number of trees is small, but it may cause some multicast data to circle around the host. Therefore, by default, when the router finds that a multicast stream is not received from the interface that is the best path to the source, it automatically switches to the source-based tree.In Sparse mode, we can manually assign an RP to a group or let the router automatically elect.It should be noted that when the router automatically elects the RP, it sends multicast traffic. Since the RP does not appear yet, these multicast traffic can only be transmitted in Dense mode, so Sparse is usually used in conjunction with Dense.

For a switch, it cannot be said that multicast is received from one interface, and flood protection is applied to all interfaces.However, the switch does not have IGMP protocol and host communication. The switch uses two schemes, one is IGMP Snopping and the other is CGMP.In IGMP Snopping, the switch listens for IGMP messages between the host and the router to determine which member of the group exists on the interface, and the multicast stream is sent from these specific interfaces.On a Layer 2 switch or a low-end Layer 3 switch, IGMP Snopping is basically used by default.The CGMP protocol is used by the switch to communicate with the router, and obtains a list of members of the group from the router to determine which groups of traffic should be forwarded by which interfaces.