A brief look at MPLS 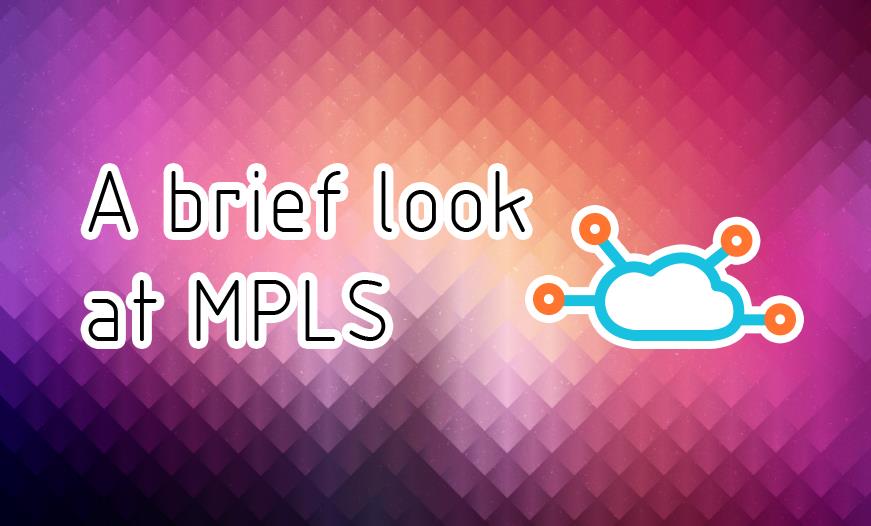 Multi-Protocol Label Switching (MPLS) is a new technology that uses tags to guide data at high speed and high efficiency on an open communication network. Multi-protocol means that MPLS can not only support multiple protocols at the network layer level but also be compatible with multiple data link layer technologies of the second layer.

MPLS uses labels for data forwarding. When a packet enters the network, it is assigned a short-length label of a fixed length and encapsulates the label with the packet. During the entire forwarding process, the switching node forwards only according to the label. MPLS is independent of Layer 2 and Layer 3 protocols, such as ATM and IP. It provides a way to map IP addresses to simple fixed-length labels for different packet forwarding and packet switching techniques. It is an interface to existing routing and switching protocols such as IP, ATM, Frame Relay, Resource Reservation Protocol (RSVP), Open Shortest Path First (OSPF), and more.

In MPLS, data transmission takes place over a Label Switched Path (LSP). The LSP is a sequence of labels for each node along the path from the source to the terminal. MPLS is primarily designed to address network issues such as network speed, scalability, quality of service (QoS) management, and traffic engineering, as well as address broadband management and service requests for next-generation IP hub networks.

Multi-protocol label switching (MPLS) was originally proposed to increase the forwarding speed. Compared with the traditional IP routing mode, it analyzes the IP packet header only at the edge of the network during data forwarding, instead of analyzing the IP packet header in each hop, thus saving processing time. MPLS originated from IPv4 (Internet Protocol version 4), and its core technology can be extended to a variety of network protocols, including IPX (Internet Packet Exchange), Appletalk, DECnet, and CLNP (Connectionless Network Protocol). “Multiprotocol” in “MPLS” refers to supporting multiple network protocols.

MPLS is a tag-based IP routing method. These labels can be used to represent hop-by-hop or explicit routing, and indicate the quality of service (QoS), virtual private networks, and how traffic affecting a particular type of traffic (or traffic for a particular user) is transmitted over the network. Class information. MPLS uses a simplified technique to perform Layer 3 and Layer 2 conversions. It can provide a label for each IP packet, encapsulate it with the IP packet in a new MPLS packet, thereby determining the transmission path and priority of the IP packet, The MPLS-compatible router reads only the header tag of the MPLS packet before forwarding the IP packet according to the corresponding path and does not need to read the IP address bit and other information in each IP packet, so the exchange and forwarding speed of data packets is greatly accelerated.

Current routing protocols select the shortest path between a given source and destination, regardless of the link’s bandwidth, load, etc., and there is no explicit way to bypass the link for lack of security. With explicit routing, you have the flexibility to choose a low-latency, secure path to transfer data.

The MPLS protocol implements the conversion of Layer 3 routing to Layer 2 switching. MPLS can use a variety of Layer 2 protocols. The MPLS Working Group has so far standardized the labels used on Frame Relay, ATM and PPP links, and IEEE 802.3 LANs. One of the benefits of MPLS running on Frame Relay and ATM is that it is for these connection-oriented technologies.

Brings any connectivity to IP. At present, the main development direction of MPLS is in the aspect of ATM. This is mainly because ATM has strong traffic management functions and can provide QoS services. The combination of ATM and MPLS technologies can fully play a role in traffic management and QoS. the label is the header used to forward the packet, and the format of the header depends on the network characteristics. In the router network, the label is a separate 32-bit header; in the ATM, the label is placed in the virtual circuit identifier/virtual channel identifier (VCI/VPI) cell header. A key to MPLS scalability is that the tag only makes sense between the two devices communicating. At the core of the network, the router/switch only interprets the tags and does not parse the IP packets.

When an IP packet enters the core of the network, the border router assigns it a label. From then on, the MPLS device will view labeled information from start to finish and exchange these labeled packets to its destination. As routing processing is reduced, network latency is reduced but scalability is increased. The quality of service (QoS) type of the MPLS packet can be determined by the MPLS border router according to various parameters of the IP packet, such as the source address, destination address, port number, and TOS value of the IP.

For IP packets arriving at the same destination, different forwarding paths can be established according to the requirements of their TOS values to meet their transmission quality requirements. At the same time, through the management of special routes, it can effectively solve the load balancing and congestion problems in the network. When congestion occurs in the network, MPLS can establish new forwarding routes in real-time to spread traffic to alleviate network congestion.

Forwarding Equivalence Class, FEC is a group of data packets that are processed in an equivalent manner during the forwarding process.

The FEC can be identified by an address, a tunnel, a COS, or the like.

Currently, only one route corresponds to one FEC in MPLS. Usually, one label is assigned the same label on one device.

It is a relatively short, fixed-length, usually only localized identifier (like a mac address), These labels are usually located between the data link layer encapsulation header and the Layer 3 data packet of the data link layer. The label is mapped to the FEC through the binding process, that is, one FEC corresponds to one label.

Label exchange channel. An FEC data stream is assigned a deterministic label at a different node, and data forwarding is performed according to these labels. The path taken by the data stream is the LSP.

Label Switching Edge Router, at the edge of the MPLS network, the traffic entering the MPLS network is divided into different FECs by the LER, and corresponding labels are requested for these FECs. It provides traffic classification and labels mapping, label removal.

With the development of ASIC technology, the speed of route lookup is not a bottleneck that hinders network development. This makes MPLS no longer have obvious advantages in improving forwarding speed.

However, MPLS combines the powerful Layer 3 routing function of the IP network with the efficient forwarding mechanism of the traditional Layer 2 network. The forwarding plane adopts a connection-oriented mode, which is very similar to the existing Layer 2 network forwarding mode. These features enable MPLS to easily implement seamless integration of IP and ATM, frame relay and other Layer 2 networks and also provides better solutions for applications such as Traffic Engineering (TE), Virtual Private Network (VPN), and Quality of Service (QoS).