Wavefront can be used by various roles such as the platform administrator SRE (Site Reliability Engineer), developers, and system administrators. Users use the Wavefront Query Language to mine and analyze the data collected by Wavefront. The results of the analysis are presented in graphical results, which is convenient for users to analyze and compare.

Compared to traditional monitoring platforms, Wavefront has the following features: 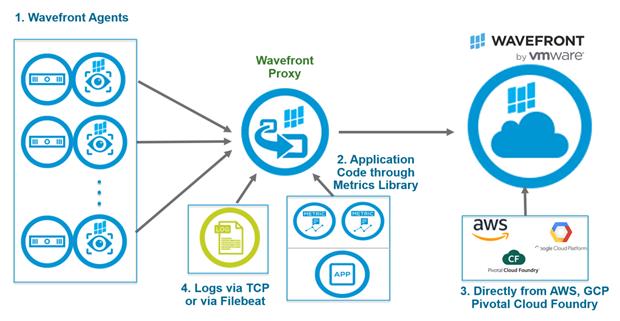 Wavefront currently supports a variety of mainstream cloud services and application platforms, and the supported platforms are growing rapidly, with more than 45 new integrations added in the first quarter of 2018, which you can see on Wavefront’s online documentation. New integration. So don’t worry if you don’t find the logo you need in the picture below, maybe it will be supported soon.

Let’s take a look at several examples of cloud storage service provider Boxes using Wavefront for system monitoring and data analysis, so that everyone has an intuitive understanding of Wavefront’s analysis capabilities.

One of Box’s services needs to access the object store on the public cloud. The different colored lines in the figure below represent multiple servers that provide the same service. Box uses the mechanism of anycast to achieve load balancing, but the performance of the entire service is very poor. Box found out the cause of the problem by analyzing the performance data collected by Wavefront: the network service used to implement anycast is not well balanced. On the left side of the figure we can see that these lines have large differences, and the servers represented by the purple lines are not fully utilized, which means that anycast does not play a role in balancing the load. After the problem was found, the Box was immediately fixed, and the corrected performance results showed that the performance curves of several servers tend to coincide and coincide, indicating that the load balancing mechanism is working. This type of problem can take weeks to find without a proper tool; but with Wavefront, Box’s engineers positioned the problem in a single day.

Wavefront quickly finds the problem with data analysis and gets twice the result with half the effort.

Next is an example of an operating system patching. Box’s security specification requires timely security patches for the operating system. So once new security vulnerabilities are discovered, the operations team will promptly put security patches on tens of thousands of servers. When a team member was assigned to this project, Wavefront created this metric (Metrics) to record the total number of patches that need to be applied. At the beginning, there were about 4 to 50,000 patches in total, but as the number of patches increased, the work of the project team gradually lags behind, and the accumulated unpatched ones are increasing, eventually reaching 300,000. It was impossible to get the job done on time by manpower, so they found a way to automatically patch. From April onwards, the cumulative number of patches began to plummet until July. This chart records historical real-world data and shows the team’s work performance to the management team in a very intuitive way.

Wavefront speaks with data and is truly convincing.

The following example comes from a cross-department global performance optimization project in Box. A senior leader asked the product manager to provide a report on the project decision process. The product manager then grabbed such a chart from Wavefront. The report was shared at the executive meeting attended by the CEO. What information does this chart reveal? This chart shows the performance of the Box service, with three lines representing three performance results:

Anyone can use Wavefront to mine valuable analysis results, which is the charm of Wavefront. 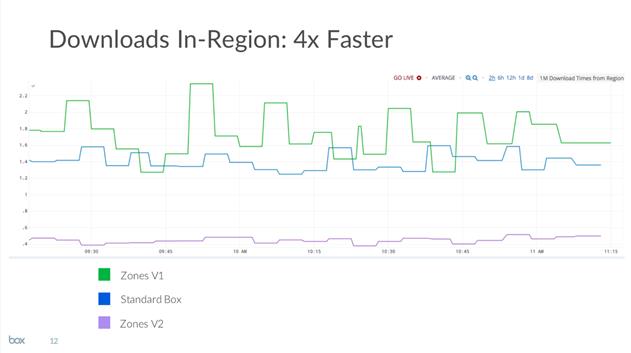