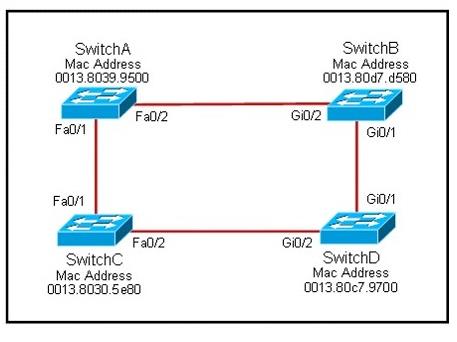 There are only three port states left in RSTP that correspond to the three possible operational states. The 802.1D disabled, blocking, and listening states are merged into a unique 802.1w discarding state.

The role is now a variable assigned to a given port. The root port and designated port roles remain, while the blocking port role is split into the backup and alternate port roles. The Spanning Tree Algorithm (STA) determines the role of a port based on Bridge Protocol Data Units (BPDUs). In order to simplify matters, the thing to remember about a BPDU is there is always a method to compare any two of them and decide whether one is more useful than the other. This is based on the value stored in the BPDU and occasionally on the port on which they are received. This considered, the information in this section explains practical approaches to port roles.

As a result, RSTP calculates the final topology for the spanning tree that uses the same criteria as 802.1D. There is absolutely no change in the way the different bridge and port priorities are used. The name blocking is used for the discarding state in Cisco implementation. CatOS releases 7.1 and later still display the listening and learning states. This gives even more information about a port than the IEEE standard requires. However, the new feature is now there is a difference between the role the protocol determines for a port and its current state. For example, it is now perfectly valid for a port to be designated and blocking at the same time. While this typically occurs for very short periods of time, it simply means that this port is in a transitory state towards the designated forwarding state.

For more information you can read the official CISCO document here.